Whinyates' RHA Rocket troop from British Cavalry Reserve Corps. These were painted as a diversion from the French Line I was doing this weekend (108 line and 36 light).

They were Magister Militum figures, who are the only ones who make a 10mm rocket troop. The men are HUGE compared to the usual Redline proportions. But as a one off, they will be fine. Easier than scratch building them. The set comes with three rockets, 12 men and a limber/wagon. There are no horses, so I thought I would do a little scene with a couple of spares men unloading some more rockets.

The rules I use, Republic to Empire, don't have a  Rocket section, so I think I will need some house rules. Something that randomises the direction and distance, to simulate the random nature of the ordinance. I don't think they will cause casualties, but rather force a morale check with a -2 modifier or something, enough to shake a nervous unit, but not enough to shake a solid one. 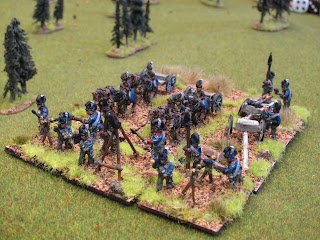 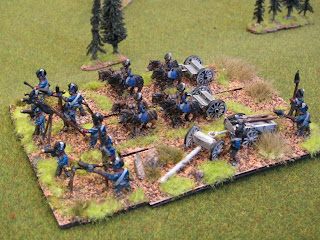