The Black Duke has arrived!

With my Brunswick 100 days force nearly completed (2 units of Lights to go), my focus has shifted to make sure they are ably led. No manufacturer that I am aware of makes a 10mm Brunswick command (not a big seller) so conversion was the only option.

A few months ago I picked up a packet of 10mm Old Glory Prussian Generals with the view of using them as a base. Old Glory has some inconsistent scaling with its mounted figures.  Some of the riders look a lot smaller than others, but from a distance it is not noticeable as long as you base them seperately. 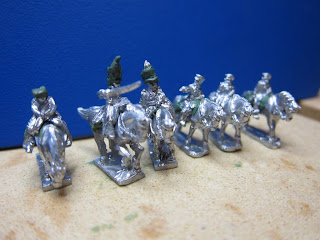 There is always a bit of fiddling getting Old Glory riders to sit on the horses. While is in nice to have interchangeable horses, there is a fair bit of fiddling around to get them to sit well. This is ok for half a dozen command figures, but I'm not to keen on doing this for a heavy calvary division. Much easier having them moulded as one unit like Redline or Pendraken.

The foot officer with a telescope is left over from the Brunswick Horse Artillery pack from GHQ. A little tall compared to the riders, but slim enough to disguise it.

Painting is pretty straight forward, and I think they turned out quite well. 10mm is easy to convert as distance and smallness is on your side. 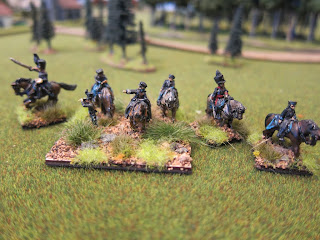