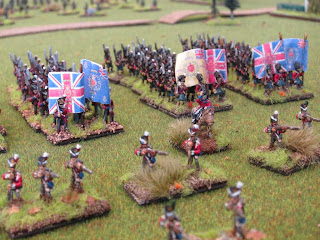 To celebrate Her Royal Majesty's visit to my town, I thought I would paint up a few British units to boost their numbers.

First off the rank were two British line units to complete Pack's Brigade. The 1st Royal Scots, also know as the Pontius Pilots bodyguards, had blue facings. The 44th East Essex, known as the Little Fighting Fours due to a large number of short soldiers serving in the unit in the Peninsular, had the yellow facing. They joined the previously painted 42nd Black Watch and the 92nd Gordon Highlanders. As part of Pictons 5th Reserve Division, there were some of the most experienced fighters during the Hundred days.


Both were part of the Redline range, fast to paint and well proportioned. I tried out a new magic wash formula (more about that in another post) which worked out really well until I tried to matt coat them with varnish. Not sure what happened but went frosted, dulled all the colours and generally looked pretty ordinary. I've tried to touch up the colours, but not a great improvment. Unfortunately not my best effort.


Next were two battalions of the 95th Rifles, one formed up and one skirmished. There were 3 battalions of the famous "Grasshoppers" at Waterloo as part of a couple of brigades - Kempt, and Adam. Kept's are the next brigade to paint as part of Picton's 5th Division. The rifles were part of the GH range, which are very detailed. I must admit I don't like their swords. They maybe the correct proportions but they seem very wispy to me, and bendy.


Finally to clear my painting desk, I finished off some British RHA limbers that had been sitting there for months. I wasn't happy with the colour my old magic wash turned the grey of the limbers (all brown and muddy), so I tried out my new black version, much better. The riders were quickly finished and based up to join a RHA battery done earlier.

So now I have a brigade + of British to take on the French. Probably another weekend would see Kempt's brigade done and enough for a reasonable battle, with some help from the Brunswick. Now I need to pay attention to some French line, who at the moment are hopelessly out numbered about 13:7! Back to the blue and white. 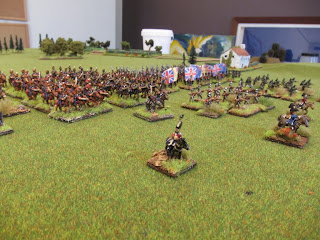 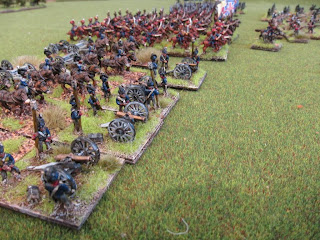 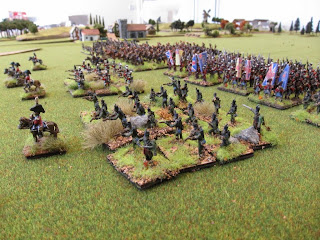 So I hope Her Majesty is pleased at my busy work.