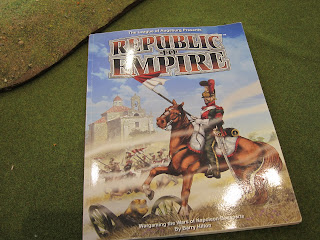 My first adventures in Napoleonic wargaming, some 30 years ago, were with the Empire III rule set. The games were long and complex and took a while for my casual opponents to get used to.

Returning back to the era, I wanted to find a new "modern" set of rules. There was a free set of rules "March of the Eagles" in the Victrix 28mm plastics box written by Barry Hilton. I liked the mechanics and flow of the game, but it only covered infantry actions. Apparently there was a "full version" around somewhere.

Looking around the net I found it "Republic to Empire"by Barry Hilton. I ordered it and had a go. After an initial steep learning curve I find them a very enjoyable, smooth set of rules to play with. I started playing in 28mm but found it translates well to the 10mm scale buy converting all the movement lengths from inches to cms.

Things not so good
Republic to Empire is available through the League of Augsburg site
Posted by Karim at 10:38 PM

Email ThisBlogThis!Share to TwitterShare to FacebookShare to Pinterest
Labels: Rules