As part of the Black Duke's Black Band (say that fast!), he had a squadron of Uhlans or Lancers. While only numbering 240 in size they were attached to the larger Hussars and fought at Quatre Bras and Waterloo as well as in the Peninsular. 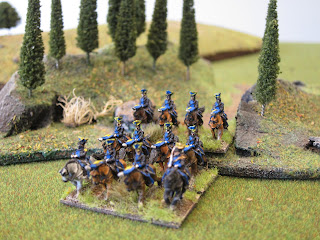 For my 1:20 units I needed only 12. Unfortunately no one makes them as such, which isn't really a problem with 10mm. I did find a packet of 30 Old Glory French Guard Lancers. There were 30 in the pack with two sets of command figures. A quick snip to remove the plume and a black and blue paint job. Done. 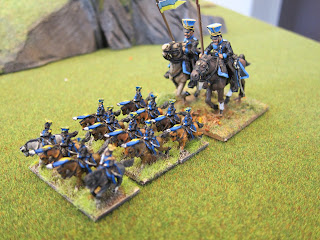 Now I just need to wait for Bend Sinister's Brunswick Hussars, the all the Brunswick Cavalry is complete.