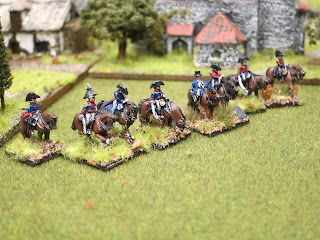 A bit like the rush around of mid June 1815, some more leaders have just arrived to join their waiting troops. Maybe they were at the Duchess' Ball.

On the British team we have Picton with his top hat and umbrella, ably supported by an aide trying to find out where they are on the map. Also the Majors General Kempt and Pack, completing their already painted Brigades.

On the Dutch/Belgian Nassau team, we have Major General Perponcher leader of the 2nd Netherland Division, along with another aide desperately looking at the map to find some French. And Prince Bernhard Saxe-Weimar (newly promoted after a horse kicked the previous commander) and Major General Byland.

Nice little figures from Old Glory. Needed a bit of greenstuff under the saddle so that they sat well on the horses.