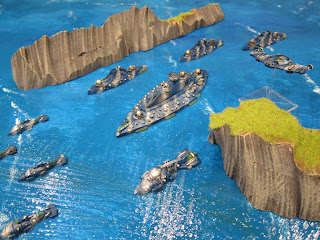 Naval battles need a nice blue base to play on, the old table cloth was not really up to scratch. I saw a great tutorial on youtube on how to make a make an effective looking table in an afternoon (see the link at the bottom).

I started with two 16mm MDF 6" x 4" boards and painted them with a basecoat sealer. Then a nice blue solid cover, don't worry too much about the brush marks.

Next, with a few different blues and greens, sponge on a mottled effect all over the board. The paints I used were old house paints and sample posts I had collected.

Then with some white, sponge on some straight lines for wave tops. The final stages involves painting on some glass coat epoxy. It is a two part mix that I added a little blue dye to it. As it is drying pat it with some scrunched up paper towel to get a nice ripple wave effect. Leave it to dry for 24 hours for a rock hard finish.

The only downside of the table is it is hard to photograph because it is so shiny. But it's a nice surface to play on.  It will be covered later with green turf mats for the Napoleonic games.

Now to get the blue paint out of my hands.

Step by step pics after the read more link