The first project for the New Year is Lieutenant General Perponcher's 2nd Netherlands Division. It was a conglomerate Division in the Prince of Orange's I Corps of  Dutch, Belgians and Nassaus. Wellington was suspicions of the Belgian's allegiance (having only recently fought with the French) and decided to mix them up a bit. It had two large brigades  - Bylandt's Dutch Belgian Brigade and Saxe-Weimar's Nassau Brigade.

While Redline doen't have specific figures for each of the different types of uniforms, some careful substitution and new paint schemes should make it all work. I am going to use Redline's Nassau line figures for the 2nd Nassau and 28th Orange Nassau as well as the 27th Dutch Jagers. The Nassau skirmishers can be French skirmishes with some careful knife work and a paint job. The 7th Belgian line will be British line in belgic shakos with a blue and grey paint job. And the 5th, 7th and 8th Dutch militia will British stovepipes in greatcoats with Nassau command. Artillery can be French foot and horse with British guns and an appropriate colour scheme.

I've started with the 2nd Nassau Regiment, part of Prince Bernhard of Saxe-Weimar's Brigade. It was one of the largest regiments present at Quatre Bras and Waterloo with three battalions of approximately 900 men each. I've painted 42 figures in each battalion, giving a nominal strength of 840, which is a good start. I may bump them up later with an extra stand of six each.

Not a bad start to the year already, with the 3 French Line Battalions I painted on New Year's Day, I am up to 25% of last year's infantry total in a week! 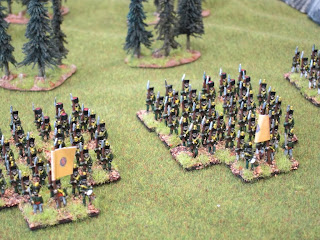 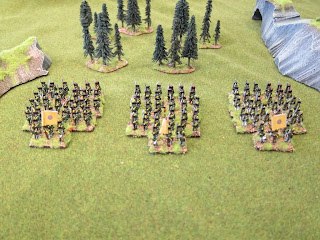 Next will be the 28th Orange Nassau and the 7th Belgian Line, while I wait for the order of the other figures from Bend Sinister. There are a couple of leaders in the conversion pile for Saxe-Weimer, Bylandt and Perponcher, once I find suitable uniform descriptions for them.
Posted by Karim at 3:00 PM