Dutch and Belgian Artillery and Limbers

Perponcher's 2nd Netherlands Division had two batteries of artillery at Quatre Bras - a Dutch Horse battery and a Belgian Foot battery. Each had six 6 pounders and two howitzers.

The Belgian Foot battery was over run by French Lancers and suffered heavy losses. Only two guns made it to Waterloo from that battery. They were deployed on the extreme left flank at Waterloo and saw no further action.

The guns are British from Redline. The crew are Redline French Line Foot and Horse artillery. The limber crew and horses are from Old Glory French Cassion team spares.

There were some spare riders and horses from the French cassions with suitable uniforms for the limber crews. A different paint scheme and they were ready to go. I like their uniform - dark grey with black collars and cuffs and red piping and turnbacks.

I needed to scratch build the limbers out of some balsa wood, tongue depressors and toothpicks, using some spare artillery wheels I had. It was easier than I thought, not bad for a recycling effort. 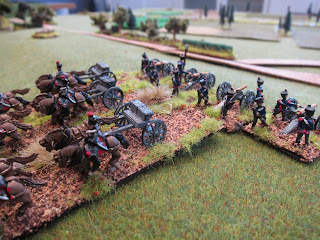