Baron L'Heritier 11th Cavalry Division was part of Kellerman's II Cavalry Corps present at both Quatre Bras and Waterloo. At Quatre Bras the Dragoon Regiments were stationed South West of Frasnes and missed the action. The Cuirassiers charged the British 5th Division under Halkett and took the King's Colour of the 69th. The charged straight through the middle and ended up at the cross roads where they met close range artillery and musket fire, before retreating back.

At Waterloo, they were part of Ney's unsupported massed cavalry charges in the afternoon. 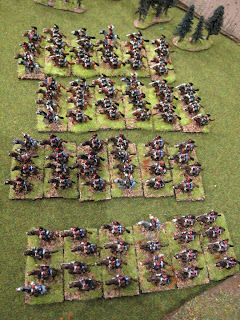 It also had the 3rd Battery of the 2nd Horse Artillery under Captain Marcillac.

I used Bend Sinister's excellent Redline figures for the Dragoons and Cuirassiers. Really easy to paint and good proportions. They are in a full gallop with swords pointed forwards. The Redline Captains always have their swords high in the air for easy recognition. 96 figures representing approximately 1920 men.

I look forward to painting more Cuirassiers and I make up the other 9 Regiments present at Waterloo. Maybe later next year.