2011 marked the start of my 10mm Napoleonics project, and this blog. The aim was to work towards playing the 100 days campaign in 2015 for the 200th anniversary. After a false start last year in 28mm, when I realised I would never get it finished alone, I switched scales to 10mm.

What an amazing journey it has been. My productivity and enjoyment has gone through the roof - I can usually knock off a battalion in an evening, or prep a unit before work. And while I had a few breaks during the year, I got a respectable total finished in the end.

There were lots of things I discovered along the way - precut bases, coloured undercoat, magic wash, speed basing ideas, casting with resin. I've had to scratch build a number of scenics, try some conversions, and think hard about how to fill in missing figure lines. I learn alot also about the OOBS and the battles themselves in researching uniforms.

Highlights would be finishing the Brunswick Corps, British Rockets, French Heavy Cavalry Division and seeing them all on a table. Writing this blog was certainly a highlight and a motivator to keep things moving. I am grateful for the comments and suggestions along the way. Over 13,500 visits since I started in February, which is amazing.

A huge thanks to the manufacturers out there for making awesome products. I especially want to thank Si from Bend Sinister for his support, flexibility and openness to suggestions. I know he does it as a labour of love, and you can see it in the quality of his figures. I can't wait to see the new releases he has planned for next year. Hopefully over the next few years he will get the gaps in his range finished in time for the 200th Anniversary pf 1815.

I am a firm believer in the Wargamers superstition - "when there is no lead to paint, you die". So I have ensure I have plenty to last me 50 more years (thanks Si). Hopefully 2012 will be just as productive if not a little more.

A full breakdown of what I painted after the break. 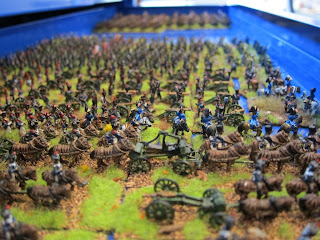