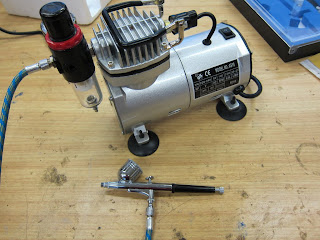 Just bought an airbrush and compressor for undercoating 10mm figures. While the coloured spray undercoat in a can is great, sometimes it obscures the detail if it goes on too thick. It is also a bit limited in the colours. I can now get more variety in the browns of the horses and other uniform undercoats - green, blue, red. If I paint the dominant colour as an undercoat, the painting process is greatly speed up.

It was a cheap unbranded Chinese airbrush from ebay, and the compressor was almost new, off someone from a local forum. The airbrush is a double action, gravity fed one. 3 Different tips and needles - not the most expensive parts but enough to learn on. I can imagine I'll get a couple more brushes that I can swap, once I know what I am doing.

The compressor is reasonably quiet, my music can drown it out! And chugs along, easily keeping up with the spraying. it dances around a bit on the desk, I'll probably put it on the flor when I get a space set up for it. I think I'll need to make a booth to limit the overspray. And make a turntable out of scrap to make it easier to spray groups of figures.

I did some practice spraying on my Covenant of Antartica Dystopian War Fleet. A blue undercoat (not with the airbrush, but some left over primer) then airbrush white stripes on it. I picked out the weapons and pipes in silver, a bit of flouro green for the energy drive bits, then magic washed them for a finish. Not to bad for an evening's painting. A nice naval camouflage. I didn't want to spent too much time on this little diversion, I have hundreds of 10mms to get though yet.

The air brush will take some getting used to, but I can see its value already. 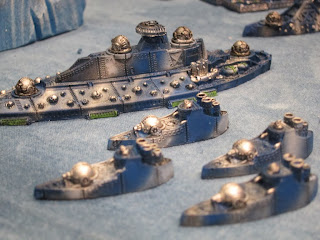 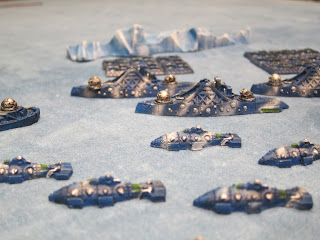 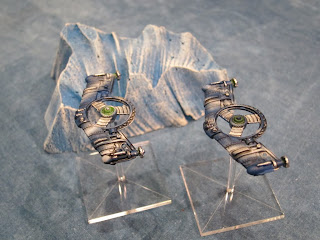 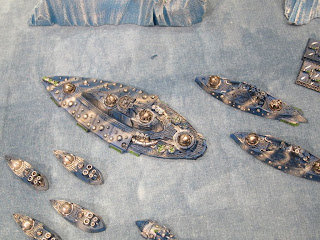