Flags for the war room 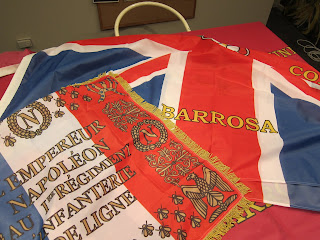 I was looking for some life sized Napoleonic flags to provide some suitable atmosphere to the war room . After asking the collective wisdom of theminiaturespage.com at this post  - I was put on to this German Flag site https://www.universalhandel24.de . Google translate was essential to work out which is which, since my German is not real good.

Having a look through the many options I opted for a French 1st Line Flag and two British Flags from the 1st Foot Guards - a King's Colour and a Regimental Colour.

The price seemed very reasonable 70 euros each for the larger British flags and 50 euros for the French flag. Postage was a flat 3 euro to Australia! This was cheap compared to the $1000's asked by the re-enactor groups for embroided flags. And for a wall decoration, I thought it was worth a go.

A few weeks later, after almost forgetting about them,  a small package arrived with the flags. Opening it up I saw them neatly wrapped up - WOW! They are life sized - so the French was 80cm square and the British 180 x 190cm. You can see how a standard in battle was important., even these replica's were stirring.

They are screen printed on a synthetic material with a nice clear resolution. The same material as other flags. The material has an open weave which make it slightly transparent. The colours a bright clear and uniform, The French had a gold fringe, and able to be mounted on a pole. The British had eyelets rather than a sleeve for the pole. The edging was all hemmed and well finished with nice straight stitching. The writing was edged in black, helping it to really stand out. There is a nice bulk to the material without being too heavy.

One small disadvantage on the screen print is that there is no reverse of the flag, which is not a big issue as I am covering the wall with them.

Overall I am very impressed and will definitely order some more. Once I start my Prussian 1815 army I can see a Prussian flag joining them (after I work out which flag is which).  I'll be renovating the war room over the next few weeks and hanging these on the wall.