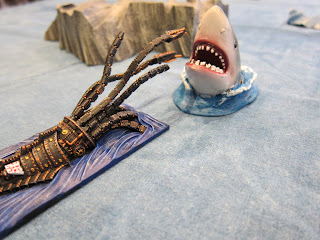 Completely off topic, but I couldn't resist sharing. My son has gotten interested in Dystopian Wars from Spartan Games. They have some fantastic little 1/1200th scale steampunk models. So we got some and started painting them up. I read in the Spartan Games Forum about a Megashark scenario and thought I would have a go a making a Megashark. I found a plastic model of a shark in the toy shop and started some surgery.


First I cut it into 4 pieces - the head, tail, fin and belly. I used these parts to make 4 different models - swimming, diving attacking and dead. I screwed the plastic pieces to 3mm MDF base and used some air drying clay to texture the base with some splashes and waves. I also needed a little body work to fill out some missing bits of the shark. A little paint and all done.


So, a scenario idea - The Empire of the Blazing Sun is down in the Southern Ocean looking for some whales (for purely scientific reasons), when they notice something big on the radar. This is a lot of sushi coming they think. Little do they know that the Covenant of Antartica has been doing some interesting experiments with Element 270 and some "fish". One of their pets is out on trial and heading for the EOBS  fleet. The fight is on ... Maybe some lost Prussians could help the EOBS. Anyway some options for some fun games and a Sunday afternoon.

I'll need to make up some stats for the Megashark.

Oh and the inspiration for the scenario is the "classic" film - "Megashark vs Crocasaurus". Not a particularly good film for action, plot or special effects. Gotta find a plastic crocodile now.


Ok enough fun for now, back to painting heavy calvary.