Cardigan and Clockwork - a small diversion 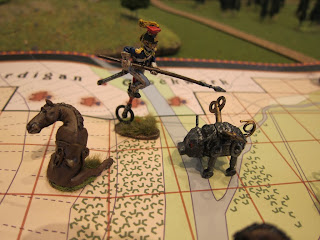 In a break from painting 10mm, I've been working on the Cardigan and Clockwork parlour game from Eureka Miniatures as a gift for my brother. This 28mm parlour game recreates the historic Charge of the Light Brigade with lancers on unicycles, mechanical pigs and disgruntled horses.

The figures are beautifully made, with lovely crisp details. And they are huge compared to 10mm. Luck there was only 18 of them to paint as my productivity is much lower for 28mm.

The back story from Eureka's site :


On a fateful night in 1854 the Commander of the Light Brigade, Lord Cardigan, lost the Brigade’s entire compliment of horses to the Turkish Commissariat on a particularly unlucky hand of cards.  Bereft of their mounts, the Light Brigade anticipated complete disgrace on the battlefield the following day. Lord Lucan, Divisional Commander and hated brother-in-law of Cardigan, on hearing the news, offered the Light Brigade six hundred unicycles captured by his own Heavy Brigade from a Prussian convoy en route to the Russians. At this moment Cardigan showed his brilliance as a leader. Brazening out the intended insult, he mounted a cycle with the cry of “Follow me lads, we’ll show them how an Englishman rides!” and with great alacrity rode away, to the jeers from Lucan’s Heavy Brigade.

The following morning as the British army formed up on the plain of Balaclava, Lord Lucan was amazed to see Cardigan’s Light Brigade performing parade-ground drills on their shiny metal steeds with greater precision than any mounted formation in the British army! “You surely don’t intend charging the length of the valley on those machines?” said an incredulous Lucan to Cardigan. “Indeed”, replied Cardigan, and then uttered the immortal line - “And we won’t have to stop to water them!”

When the fateful order came: “There is your enemy! There are your guns!” the brave six hundred wheeled towards the Russian batteries, expecting a devastating hail of shot. But the guns were strangely silent. Instead, a mechanical ticking and clanking filled the air as the Russians unleashed a fresh terror – a new weapon designed to disrupt cavalry charges – the Clockwork Pig!

But the iron porkers had no effect on steeds made of rubber and steel, and the skilled unicyclists merely wheeled around the pigs, giving them a good poking with their lances before plunging onwards into the Russian lines to win the day! 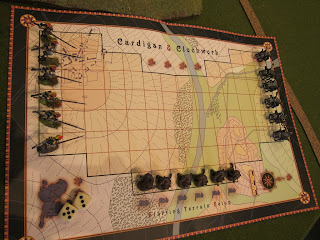 The set comes with six lancers, six pigs and six horses as well as a playing board. You need to supply a couple of six sided dice. Rules can be downloaded from here at the Eureka Site. They are well written and easy to pick up. Perfect for that evening casual game with some friends with a good sense of humour.

I also bought a set for myself to paint at some stage.

More photos after the break. 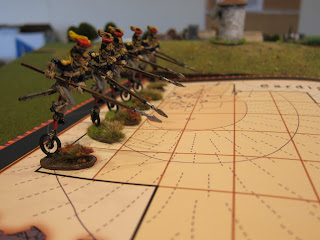 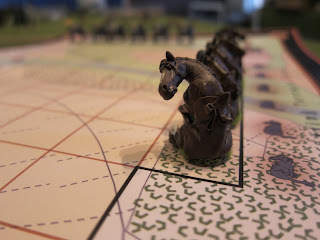 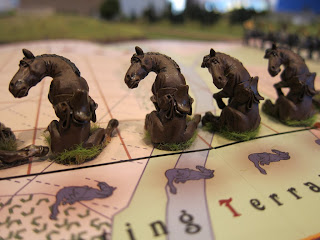 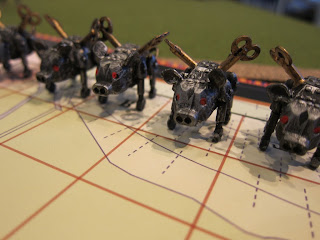 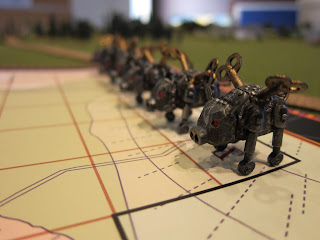