During Waterloo, Napoleon's personal carriage was kept at the back of the battle guarded with the other baggage by a battalion of Foot Chasseurs of the Guard. Despite the picture on the left of a defeated Napoleon abandoning his carriage, Napoleon didn't ride away in his carriage after Waterloo. Marchand ordered it to be taken back to avoid capture. Napoleon eventually took one of Marshal Soult's carriages that was left near Genappe.

The carriage itself was captured in the rout after the battle of Waterloo on the 18th June, by Prussian Major von Keller. It was the later acquired by an Englishman William Bullock who put it on exhibition in London to the fascinated public. Later in 1842, the carriage was acquired by Madame Tussaud and was displayed for the next 80 years. Unfortunately in 1925 it was completely destroyed in a fire.

Made in April 1815, it was superby crafted. The interior could be made up to be a bedroom, office, bathroom, dressing room or dining room. It had many secret compartments and clever storage areas where the Emperor's personal effects, maps and some treasure was kept.

There are not a lot of options in 10mm to model this unusual objective piece. Pendraken make an 17th/18th Century Carriage as part of their Seven Years War range. There are not any pictures on the website or the forums or anywhere really, so I took a chance and ordered it to see if it would be suitable.

The kit comes with 4 horses, the carriage and separate wheels, a chest and sack and a driver in 18th C clothing (tricorn, big cuffs, heavy cloak). The carriage itself needed no modification being close enough, other than painting. There is not too much detail on the carriage, it seems pretty generic.

I decided that the driver needed to be converted to having a bicorne and imperial livery. The large cuffs were trimmed down and the tricorne cut off. Bit of green stuff later and ready to prime.

The rest came together pretty well, a bit over an hour and it was all done and based. I used a  spare Chasseur a Cheval of the Guard as an escort. I am not sure about the N on the side, I might paint over it later, my attempt at an eagle was pretty poor. The carriage will make a good objective is the post Waterloo scenarios. 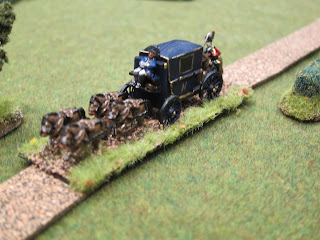 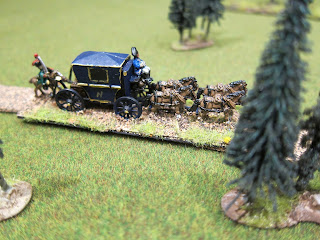