Leave your baggage behind

In the Napoleonic wars there was a considerable logistical effort when moving hundreds of thousands of men. Even the French, who "lived off the land" and foraged as they went, had a considerable collection of wagons and stock following behind. Generally baggage trains were out of the way of the battle, but can play a interesting role in scenarios or campaigns. In the 1815 campaign, the wet Belgian tracks were gridlocked between battles. Part of the delay in British and Allied troops arriving at Quatre Bras were due to a baggage train jam.

In the larger scales (15mm and 28mm) baggage trains can be expensive to collect. In 10mm they are far more affordable. There are a few different options available. Old Glory, Pendraken and Irregular Miniatures.

These figures are Irregular Miniatures from Eureka, beautifully detailed. A loaded wagon and pack horse. They were undercoated brown, colours blocked in then magic washed. Only an hour or so after dinner one night. The marching soldiers were left over from previous units. They will join the Old Glory wagons I painted 18 months ago. I'll use them as fillers in the Artillery parks. 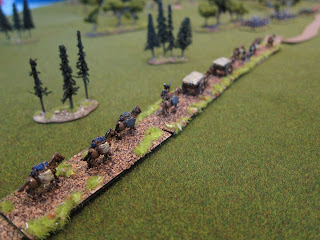 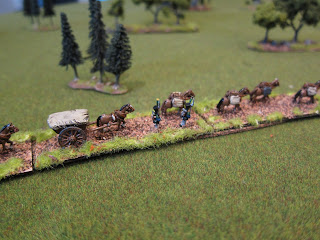 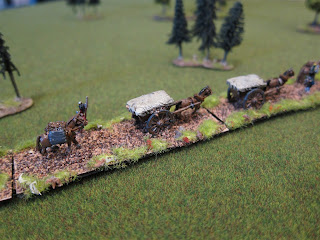