Finally finished the French Guard Cavalry of the 1815 campaign.

The light Cavalry Brigade under General Desounettes had a large regiment of Chasseurs a Cheval (48 figures) and a Lancer Regiment comprising of the 1st and 2nd Guard Lancers. The majority of the lancers were the Red "Dutch" Lancers with a squadron of the Polish. I have only depicted the Red Lancers, might have to do a squadron of the Polish later.

The heavy cavalry comprised the Grenadiers a Cheval and the Empress Dragoons under General Guyot. Guyot took over command after General Letort was wounded by a stray musketball, at Charleroi after the Dragoons broke two Prussian Squares. The Dragoons angered by their beloved commander charged and destroyed the remaining Prussians. He died a few nights later on the eve of Waterloo.

One of my favourite stories of the Battle of Waterloo was during the French retreat where the Allied Cavalry confronted the Grenadiers a Cheval who ignored them and walked off. The Allies were so intimidated they didn't attack, even with overwhelming numbers on their side.

Both Brigades played a part in the charges at Waterloo.

The Empress Dragoon and Red lancers were painted by Fernando Enterprises. I painted the Grenadiers and Chassuers a Cheval.

Now onto the Guard Horse Artillery ... 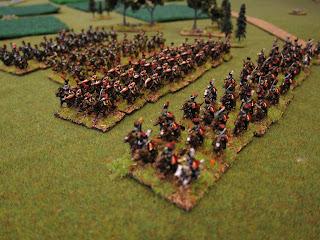 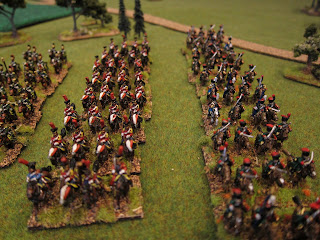