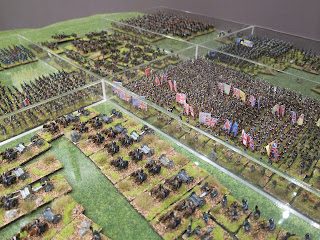 Part of the challenge of the Quatre Bras scenario is the uncertainty and confusion of reinforcements on both sides that arrived during the battle. In some ways it was an accidental battle. If it wasn't for Perponcher and his 2nd Netherlands Division disobeying orders and holding their ground, the battle would have been very different, or not have occurred at all.

To try and simulate this, I have made up a simple table for reinforcements. It is divided into 20 minute turns from 12pm until 9pm.  If there is a number in a time slot for a unit, a D6 is rolled. If it is equal or higher than the number in the box, the unit arrives. If not a roll is made the next turn with a reduced number.

The French have more reinforcements at the beginning, then it slows down later. I have got the 1st, 2nd and 3rd Divisions from d'Erlons Corps in the mix to see what happens, but there is a chance they don't turn up.

The Allies start off lean, with more and more troops arriving as the afternoon progresses.

The Excel file can be found here - Click here to download. Feel free to modify it to suit your needs.

I'll do a test run and see what happens.
Posted by Karim at 9:00 AM